It's Sunday, but the sun is hiding. Go figure, on my only day off. I just hope it doesn't rain. I have piles of laundry to catch up on, and I much prefer hanging it out on the line than using the drier, or making the house look like a chinese laundry. I do have lines strung in the bathroom a couple inches from the ceiling and I make use of them on a regular basis, especially once the weather gets cool enough that the wood furnace is going.

Hubby is gone salmon fishing on the Miramichi in New Brunswick, compliments of the kids and I. Out-of-province fishing lisences are expensive but that's what we gifted him for his 40th birthday. Not to mention the logistics of rearranging mine and the teenager's work schedules to accomodate his absence. I'll be glad to see him Tueday evening. When he's away, I find myself craving adult conversation. And all of a sudden I can understand Laurie's brand of lonely. I think, I can. I mean, the kids are here, and they're constantly in and out of my room wanting something or other, but I want the adult back. My long distance carrier is no doubt thrilled since I've been making calls to friends I usually keep in touch with through email. Ah, the cost of adult conversation. Why is the companionship of a mate so often taken for granted?
Posted by Barbara from Nova Scotia at 11:21 2 comments:

Empty. My house is empty. If you don't count the cats and the dog and the goldfish. I am the only human in it. For at least another few hours. Maybe I won't bring the rest of the residents back. Nah. That just wouldn't do. I sure can enjoy this silent empty house while it lasts though. Talk about a vacation! hee hee hee

Hubby is at his aunt's summer cottage in Charleston with the kids, the two little ones, building a deck onto the back. I am home with the teenager (who works during the day, leaving by
6:30 am). I would have stayed at the cottage too, but I had to work on a wedding dress to deliver today, and I have to work at the jewelry store, but not until this evening. Plus the animals wouldn't have liked me for abandoning them without food or water. I am starting to think that teenagers may not be so bad. When he got home yesterday afternoon, he said hi and then went about his business. And later when he saw me sewing on a gazillion beads on the wedding dress, he had sense enough to stay away and let me work in peace. Good boy. We ate leftovers from hubby's birthday party for supper so food prep was totally painless. I am sure enjoying this quiet. And I'm pretty sure that the dog isn't going to rat me out for letting her sleep on the couch. I'm thinkin' I might have to send them away more often...
Posted by Barbara from Nova Scotia at 09:24 4 comments:

Too Much of a Good Thing 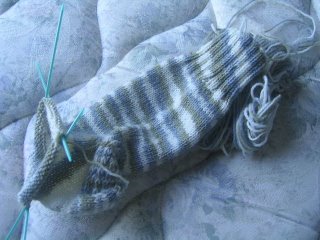 Definitely. Too much of a good thing... is simply too much. And Too boring. This a sock for Colin, from the same batch of yarn as hubby's socks. Good grief, these are going slow. As much as I like the colours, I am bored out of my mind. I've been receiving packages all week of stuff I acquired on-line, and let me tell you, the pull is strong. Today I'll pick up another package from the post office, and get the privilege of paying duty on it. What is that free-trade crap about anyway??? Anyway. I don't want to turn this little post into a bitch session.

Hey... I started another job. Still doing tailoring 3 days a week, but now I am employed as a diamond pusher. That's not quite right. I am working in a jewelry store, helping people part with their hard earned money on shiny, pretty trinkets. I like it. The other ladies are great, and if it's a slow day, at least there's someone to talk to. And of course there's all that time I get to spend picking and choosing items to separate me from my money. I tell ya, the pull is strong. Didn't I already say that once?? I am so easily influenced. Gee.

This weekend is hubby's 40th birthday. I was planning a big surprise birthday party. Only to find out yesterday that he was talking to friends and inadvertently uninviting them. So I got mad and kind of spilled the beans. So now he knows and is trying not to interfere. Except for saying he won't there for it. Because he doesn't want a party. Liar. He'll love it.

Did anyone else notice that the days are getting shorter?? Damn. Once again I'm driving home from work in the dark. Double Damn.
Posted by Barbara from Nova Scotia at 10:23 2 comments:

Thanks to everyone who sent kind thoughts about the bunnies.

Life goes on. Although I love raising animals and working this farm, although I might shed the occasional tear, I try not get emotionally attached to my livestock, be it bunnies, chickens, sheep, cow... Animals die. Period. Some of natural causes, some at my hand because their final destination is my dinner plate. I am a farmer. I learned a long while back to take the good with the bad. I don't cry when a fox or coyote thieves and kills my chickens or ducks (I am down to one duck and she's lonely; her mate got snatched in the spring.). I did cry when my milk cow died a year and a half ago. She was wonderful and very productive animal, and her offspring fed my whole family for better part of nine months. Now I not only have to spend money to buy milk and butter and cream, but also meat. I don't know if those animals that produce for the supermarkets are treated humanely. I would venture to say not nearly as humanely or as well as they would be if they lived on my farm.

Does anyone actually think about where their food comes from anymore? Or just complain about the rising costs? Why is it so expensive to eat healthy?

Posted by Barbara from Nova Scotia at 11:36 2 comments: