Well, I tried. And even though I crashed and burned, it was still a good idea, participating in NaNoWriMo Challenge 2009. I'll do it again next year, hopefully with better results.

I don't know what my final word count is/was. Although writing longhand in a notebook actually got me writing and getting the ideas down before they evaporated, it turned into that proverbial double edged sword. If I haven't already, let me say that a laptop would have come in extremely handy for this challenge. It would have saved me from having to type what I had already written. Somehow I doubt my Word program's ability to produce a word count from scanned pages. That's the way it goes. Part of my problem was that I liked to be comfortable while writing/creating a story. I would write late at night, when everyone else would be sound asleep. I'd settle into my nest and allow the ideas to come. There were nights where I ran out of steam before running out of ideas, sometimes coming awake after a short doze to find notebook and pen still in my hands. I admit that transcribing my story proved useful, as well. Where I had only dialogue on paper, as I typed I was able to fill out the scene almost subconsciously. While I didn't want to get bogged down with all sorts of details as I wrote longhand, they practically typed themselves, and so my word count grew. The other side of that process was that I would actually stop transcribing to pick up pen and paper again if an idea blossomed to move the story along. Bizarre but true.

So as of this post, I haven't transcribed even a tenth of what I have written. The up side of this is that I actually intend to keep working on my story and hopefully one day it will reach that magic 50,000 words. That's when I will sit back and evaluate if there's anything worthy of a second draft. Time will tell.
P.S. Thomas seems to be fully recovered. He was begging to go outside by Sunday morning. He is staying close to home, though. Thanks for all your kind thoughts and wishes.
P.P.S. I finally repossessed my coat from Pandora. 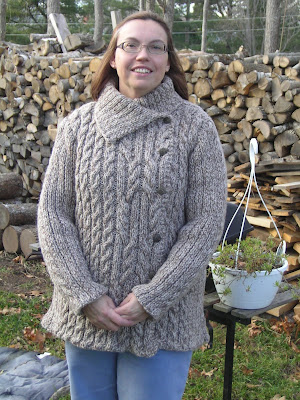 Posted by Barbara from Nova Scotia at 18:14 3 comments:

Poor Thomas. My son's cat. Rescued from the Oromocto SPCA in 2001. He's a fighter. That's a problem. He's mainly an outdoor cat, ruling the neighbourhood with a heavy paw. This summer a couple new cats moved into the house cross the road and Thomas has been busy educating them about turf boundaries as evidenced by all the fur they've been leaving behind. A couple weeks ago things didn't go so well for Thomas, and we wouldn't have known except for the bloody pillow that he left on his owner's bed where he spent the night to recuperate. By morning his face was a mat of dried blood and fur. I cleaned him up and he was back out on guard duty by the afternoon. Yesterday afternoon I got suspicious when he hasn't begged to be let out. I tracked him down hiding in the laundry room/my sewing room and gave a good once over. I didn't see anything wrong but when I tried to scratch his chin he started whining. Looking closer I noticed the right side of his face fluffier than normal. I gave it a little poke and he just about took my hand off. I thought he must have gotten into another scrap so I tried feeling around for a cut and when I couldn't find anything I decided to clip some of the fur off his cheek to get a better idea of what was going on. Turns out that his cheek was incredibly swollen under all that fur with a massive abscess and after some phone tag with the vet, she was able to see him this morning.

As I said, poor cat. He was so stressed out, his bladder failed him. Oh, the stench. The weigh in? 5.71kg! Definitely not a feather weight. Anyway, the vet told me to leave Thomas and come back after hour to give her time to lance and drain the abscess. She injected him with a time-released antibiotic so I don't have to shove pills down his throat. When I picked him up in his carrier, he had blood all down his chest, all the more dramatic looking because of his white fur. Poor kitty. After all that, I had to give him a bath when we got home to wash the blood and urine off before I could allow him to roam; on second thought I decided to make the bathroom his home for the next day or so to keep an eye on him. The vet left a hole in his cheek so it could keep draining, and I really didn't want Pandora harassing him in his weakened state.

All in all, very traumatic, but it looks tonight like he'll recover.
Posted by Barbara from Nova Scotia at 19:44 5 comments:

Read how clever I am here. Now I must go to FarmVille to farm away my pain. Heh
Posted by Barbara from Nova Scotia at 19:13 2 comments:

Thursday (I Am SO Original)

First:
I want to thank everyone for all your kind birthday wishes. Thank you!
I'm currently reading a book that's providing me with belly laughs aplenty: Such a Pretty Fat by Jen Lancaster. In my opinion everyone could use a monster laugh that will cause tears to run down their cheeks. In fact, it's my belief we don't laugh enough.

Would you believe I signed up for the NaNoWriMo Challenge? I did. I've no idea what my word count is so far as I'm using a notebook and pen, the goal being 50,000 words. It's easier to be inspired sitting in a cozy bed with a cat curled up on my feet than staring at a computer screen. Which would explain why my blog posts are so sporadic. What I wouldn't do for a laptop...

After last week's burst of energy to get the house shiny and neat, I'm sad to report that sloth has taken hold again and all inspiration to clean has evaporated. Don't look so shocked. Just give me an hour's notice before you drop in for coffee, OK?

Last night while watching Princess Diaries with the kids I casted on hubby's sweater. Shockingly enough, I got gauge on the first try using a strand of Briggs & Little Heritage and a strand of Patons Classic Wool to give me the 13 stitches to 4" on 6mm needles. I decided to knit this sweater in pieces as written to make this project more portable. I wonder what the odds are that I will be able to get this done for Christmas?

It's that time of the year again.

I was checking in at Dorothy's and Heddy's blogs recently and it would appear that they've both taken up the torch to Pay it Forward. Now I will too.

I agreed to take part in a Pay it Forward exchange. It's a pretty neat idea: you can receive a personal, handmade gift from a talented crafter, and all you have to do is "pay it forward" by agreeing to do the same for three people.

If you would like to receive a handmade gift from me, and are willing to make and send a handmade gift along to three of your blog readers, please let me know in my comments. Once you accept, you will receive something from me within 365 days. In turn, you will have 365 days to fulfill your end of the bargain.
Posted by Barbara from Nova Scotia at 15:30 2 comments: 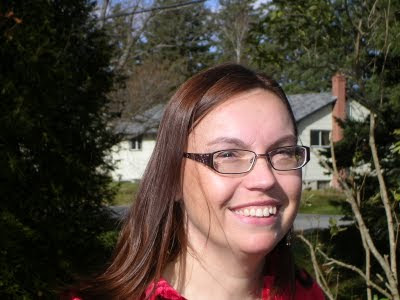 Not quite over the hill yet.
Hubby took a break from hunting to be home for my birthday. He woke me up this morning with a mug of coffee in one hand and a plate of French toast in the other. Good thing that he came bearing yummies or he wouldn't have survived the 6am wake up call. I don't do mornings, well, or otherwise. After we booted the kids on their way to school, we went to New Minus to pick up my new glasses and for some shopping. 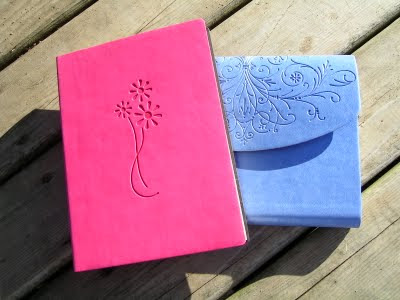 I got these two beautiful leather-bound journals, and a king-sized feather pillow, just because I deserve to be spoiled rotten on this one day of the year. Then he took me to lunch at Union Street Cafe in Berwick, where the food is always delicious, and the service outstanding. A perfect meal with the man I love.

Yes, it was the best birthday ever.

Posted by Barbara from Nova Scotia at 18:19 4 comments: