The blanket from hell is finished (aka Spicy). Believe it or not, it already got a test drive a couple days ago when it was so cold and rainy it no longer felt like summer. Seriously. Wool is good. 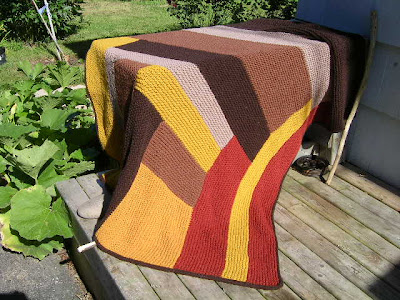 Finished another pair of socks for Mathew's baby, 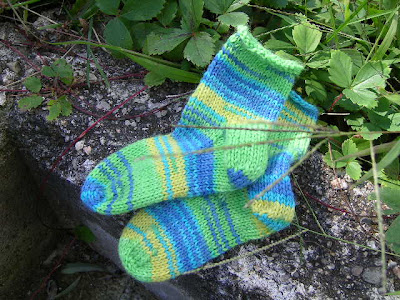 and a baby blanket. Knit in mistake rib, it's so squishy and cuddly I was momentarily tempted to keep it. 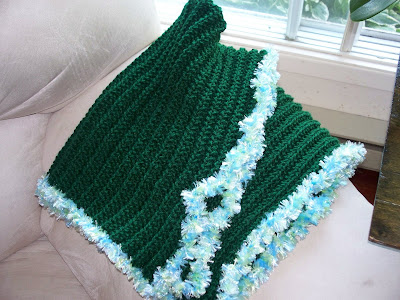 I finished another baby sweater too, chunky knit cardigan pattern from Simple Knits for Cherished Babies by Erika Knight. When I had all the pieces laid out for steaming I realized that this pattern could be improved. 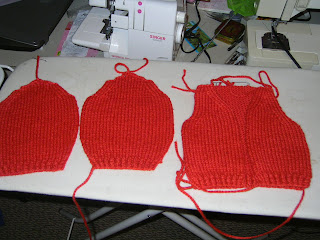 I didn't like how the sleeve caps had those obvious steps and how chunky the seams were. I may not be a big fan of seaming at the best of times but especially in wee little items for itty bitty humans it seems pointless. It is pretty darned cute though. 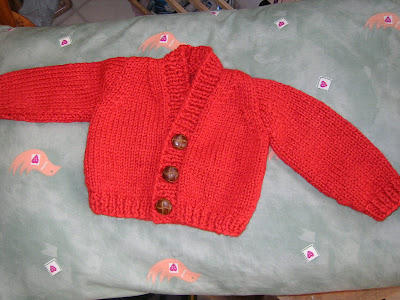 I am at work on another one for a friend that's expecting in about 3 weeks, and I am writing down the "tweaks" that I plan to post once finished.

Finally, what's finished is Weekend Designer, after 100 posts. Go visit. There may not be any more posts in the works but what is there is stellar.
Posted by Barbara from Nova Scotia at 15:37 4 comments: 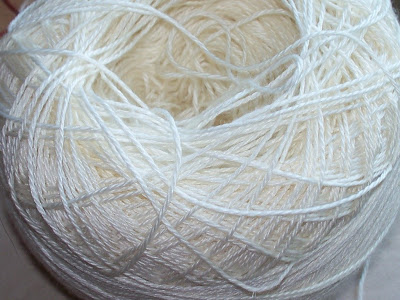 I got 100 g of roving, too, since I do plan on dusting off my spinning wheel and attempting to learn to spin, again. 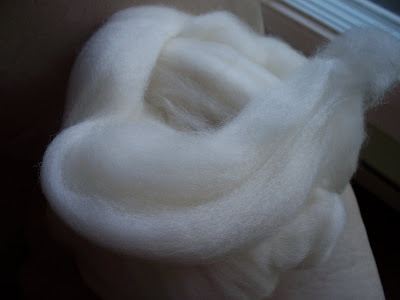 I let the kids pick out some wool to keep them busy while I wound my treasure. They both had made a good start on their scarves by the time I was ready to go. Brenda, the Gaspereau Valley Fibres owner, was quite impressed.
Posted by Barbara from Nova Scotia at 20:49 2 comments:

Memories of a Birthday

The little town of Middleton where I live celebrated its Centennial on July 17 & 18th.

On Friday evening there was a parade that very nearly got rained out but had a great turnout nevertheless.

There were lots of cool floats 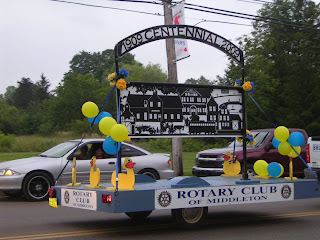 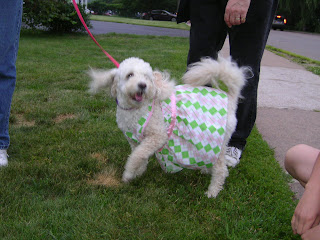 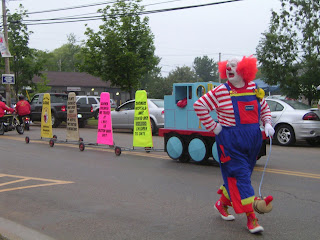 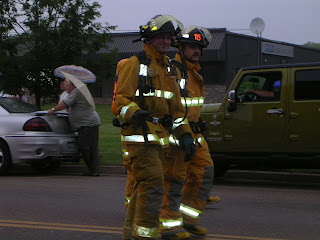 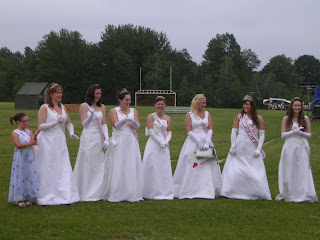 and pretty princesses.
On Saturday morning was the 4-H Dog Wash Fundraiser to raise money for our brand-spanking new club, The Lucky Stars. 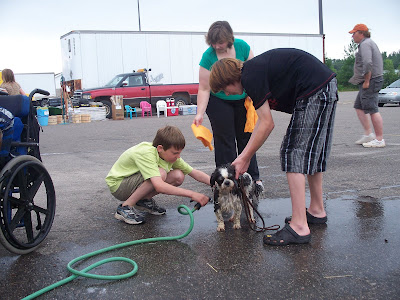 At the end of the four hours I could barely stand up straight. The kids were good sports but started losing interest once they realized how much work was involved and each following dog started to get less and less attention, leaving the adults to do more and more. Getting each other wet was a lot more fun for the kids! We had a professional groomer who volunteered to help out as well, and without Kelly I know we wouldn't have raised even half the amount that we did.

There were some great concerts throughout the afternoon at the Rotary Park, but my family only attended the last couple by Cape Breton natives. We may have snuck a longish nap after the dog washing. We were all completely wiped out. 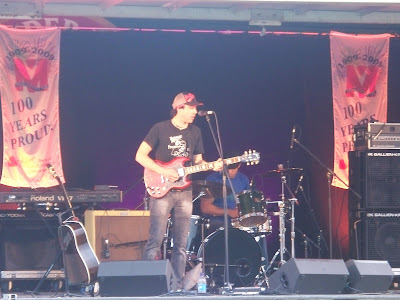 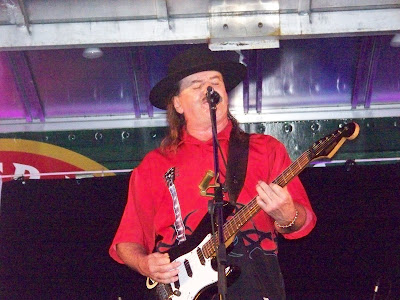 At the end there was an incredible fireworks display that seemed to last forever! 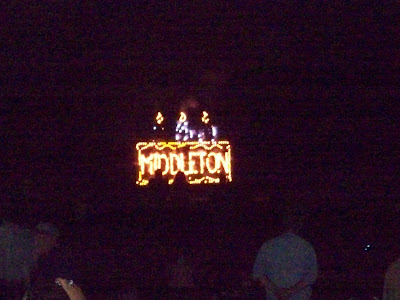 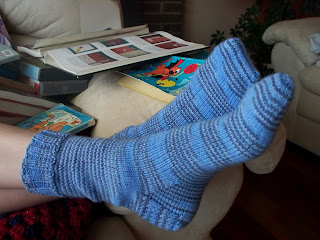 And because I knit during the concerts, by the end of the evening I finished Colin's socks. What a bonus!
Posted by Barbara from Nova Scotia at 18:34 3 comments:

No Talent for Stripping

Talk about a loaded title, eh? Now get your mind out of the gutter. I'm still working on renovating the bathroom, on the cheap since money is always in short supply. Hence the stripping. I never considered it would be such hard work! I've had the drawers and doors off the vanity for two weeks now, working up to getting to work on the whole stripping thing; let me rephrase: refinishing thing. The vanity cabinet is home made, I have no idea how old, just that it's in decent shape but for the poor varnish job. I've undertaken to refinishing rather than replacing the cabinet since I haven't been able to find what I want to put in its place, and what has come close has been ridiculously expensive and not even made of real wood.
Let me tell you this: doing the preparation work prior to applying the lovely new finish I picked out is going to take a LOT of time and effort and energy, some of which aren't always readily available. So far I've got two door down to bare wood (I hope) and a third is about half done. I started by sanding but that was taking forever and wasn't terrifically effective, so hubby pulled out the chemicals for the shed. Eeeek! The very stuff I've been hoping to avoid. Granted it worked faster with much less effort. But you know me, Mrs. As-Natural-and-Organic-as-Possible. I'm realizing that sometimes I need to bend my rules, for the sake of my own sanity. The grooves were especially difficult to deal with. I may have to come up with a different plan for actual cabinet which is attached to the wall. I really don't think I will be able to use that wood stripper inside without frying about a gazillion brain cells. I'll try to employ hubby's ancient palm sander for that job. 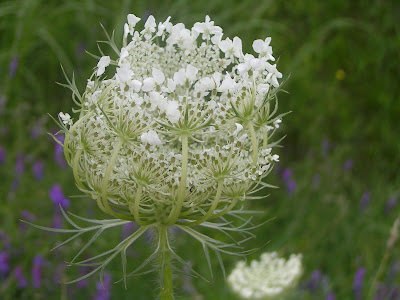 I've been exceedingly lazy in updating this blog, although there's been lots to write about. Complete updates soon. Honest.
Posted by Barbara from Nova Scotia at 20:51 2 comments: