Fun When There's No Sun

First an oops to show you. Sometimes it really doesn't pay to knit while watching a movie, even if it's only garter stitch. I found the dropped stitch last night, about three inches past the offense. Since I really didn't want to re-knit three inches worth of garter stitch, I dropped the stitch beside it (I should have dropped at least two or three looking back on it) and picked up two in the space of the one. It came out a bit tight, that's why I should have dropped an extra one or two, but at the time I just wanted to fix it and move on. You can hardly blame me. It will be a big blanket and I hope the oops won't show so much when it's all done. I decided I will call this blanket Spicy, for the colours that are so well represented in my spice cabinet: curry, cinnamon, mustard, ginger, cayenne pepper, cocoa. Puts me in a baking mood.

School finished yesterday morning for summer break, and today the kids are already getting on mine and each other's nerves. Grrrrr. So I decided to put them to work. Child labour be damned. They were actually eager to get started. Whether they will complete the job is another matter.
I knew I wanted that ugly, dark wallpaper gone from the moment we moved in. I don't think a better opportunity would have presented itself if I waited another year. So far they've got the worst of it off, and now have to start working on removing the backing. It's going to be a long process that I am not prepared to start right now, since I have to find a tool that will be safe to use in the kids' hands without them gouging a bunch of holes in the drywall. Touchy.

I am suddenly inspired to knit a Kitty Pi bed. It's all Caroline's fault. Her kitty looks so comfy and the bed so pretty. Did I mention that it will use up lots of stash if I make one for each of my kitties? HA HA HA HA
Posted by Barbara from Nova Scotia at 14:48 6 comments:

There is nothing like a good thunder storm to clear the air. By bedtime, with the pouring rain washing the humidity away I was able to turn the fans off. Baking bread wasn't the major ordeal I was dreading. When I took the loaves out of the oven the whole house smelled divine, the yeasty aroma seeping into every room. 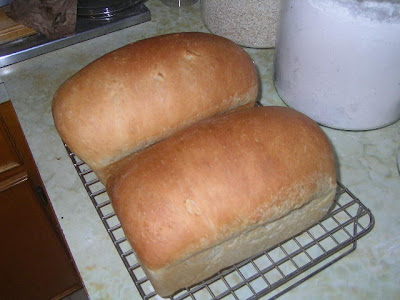 Apparently there are more of those Moderne Log Cabin blankets than I realized. A Caffeinated Yarn is making one. Iron Needles finished one back in March that is lively with colour. Mine is progressing well. At the moments it is 62cm x 74cm (24.5" x 29"). I am loving its stash busting properties. 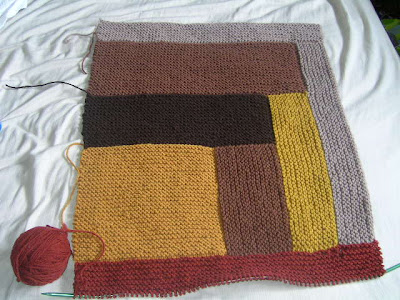 Between this blanket, all the socks I've been knitting, and the baby items I still plan to knit, I should not only meet but exceed my goal of busting the stash by 100 skeins (there's a group on Ravelry). Unfortunately I lost count when I went away in February and haven't bothered to keep track since I returned. My finished projects will help me with some of the numbers.
Posted by Barbara from Nova Scotia at 12:51 5 comments:

I don't often complain about the weather. Honest. But seriously? I'm quite certain that the major reason I haven't moved back to Ontario, where my mom and brother with his family live, is to avoid their hellish summers. I'm not cut out for dealing with humidity. I am weak. I like that I can drive 10 minutes and be enjoying the cool ocean breezes. Unfortunately a jaunt to the ocean is not possible when there is stuff that just has to be done. It's hard to vacuum, or wash the dishes, or do the laundry, or sweep the floors when you're not actually and physically in the house. Damn. At least the kids are out with their friends so technically I suppose I should be able to get my work done that much faster. If I wasn't on the computer that is, bitching about the weather.

I may be acting a bit self-indulgent and like a drama queen when I say that I barely survived yesterday, and today is no better. The air is so saturated with moisture it's practically inhumane. (God help those people that have locked their pets outside or in vehicles on such a day!) There is no point in hanging out laundry because I doubt that it would dry. Good thing I'm relatively healthy. I can't imagine what it must feel like to people with breathing problems. At least I live in a place where I have access to clean drinking water, that I don't have to boil first.

Because as a friend kindly pointed out a while ago, with me, the weather thing is personal.
Posted by Barbara from Nova Scotia at 16:49 3 comments:


How Abnormal Are You?
Posted by Barbara from Nova Scotia at 15:11 1 comment: 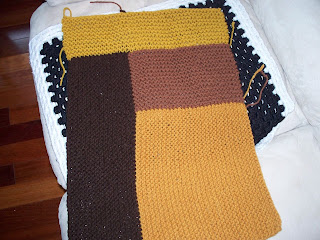 From Mason-Dixon Knitting. The Moderne Log Cabin Blanket. Being knit in Briggs & Little Atlantic, adjusting the cast on down to 36 stitches on size 6.5mm needles. I'll stop knitting either when I run out of yarn (I have a lot of these particular colours), or I get sick and tired of it, or when it gets big enough to cover the house. I wonder which will come first. So far it measures 41cm x 56cm (16" x 22"). It hasn't gotten old yet but then I've only been knitting on it over a couple movies. The Harlot is making one too and you can click here to see her progress. Unlike her, I'm taking some liberties with the block sizes, just because it's my blanket and I can do whatever I want.

I finished reading On Writing by Stephen King. Excellent book, well written. Inspired me to start writing again. For me it's not so much about publishing but about putting my stories down on paper, because that's what gives me pleasure. It also doesn't hurt to dust those cobwebs from my brain.


For those interested, I already ripped back the baby kimono and plan on re-knitting it in stripes. I may even use that funky stripe generator. Also, in regard to baby knits, I've been informed in no uncertain terms that I'm a slacker. By Mathew, the future father. Apparently his fiance's grandmother has already churned out a couple hats, four (!) blankets, and a couple sweaters. Now you got to understand that IF I was a competitive kind of knitter, this revelation would grate on my nerves. It would probably make me say things like "she's probably using cheap, itchy acrylic" and "the stuff is probably ugly as sin" and "the stuff won't even fit". Good thing I'm not competitive (although I kind of think that's why Mathew told me of her accomplishments, probably in hopes of lighting that proverbial fire under my needles to start creating many and marvelous little bitty baby items). OK. I am a little bit competitive. I plan on knitting more baby stuff for his baby, due date October 21 so I do still have lots of time, and I also plan on sewing a number of adorable pieces too. So there. 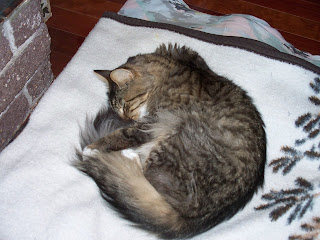 In other news, Sam the cat is finally on the road to recovery. After a week, he's starting to fill out a little, eating more regularly, spending some time outside, and actually jumping up on my belly for cuddles while I read. This is all fabulous news, naturally. Even the pads of his feet are all better. I suspect that he may have strayed to one of the neighbouring places that sprayed pesticides about a month ago, which would explain the severely swollen and red pads; it would also explain his weight loss if he was poisoned by eating the chemical- sprayed grass.
Posted by Barbara from Nova Scotia at 19:20 4 comments:

After all that glee over spontaneous baby kimono knitting, I went and slammed up again the idiot wall. Must be because the knitting fates didn't want me to get too big for my britches. Especially since I tinkered with a perfectly good pattern and tried to turn the kimono into a sweater. That'll teach me. Maybe. But I will never start another project without checking my yarn quantities.
Wanna see? 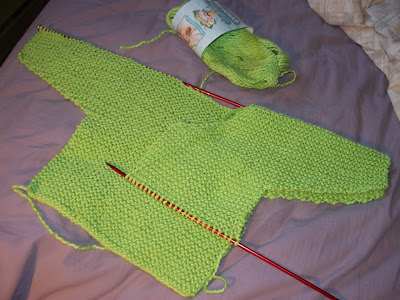 First check out the amount of yarn left on the ball. Now notice the amount of sweater still in need of knitting? Yeah. And I don't have any more of this colour. Stupid, stupid, stupid. Hope the water in the frog pond is warm.

This is the first one. 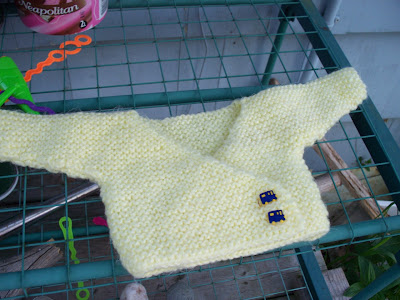 With the seriously cute buttons. 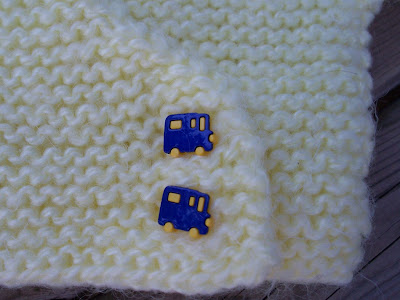 Posted by Barbara from Nova Scotia at 20:52 4 comments:

Hubby's son is expecting a son come October and as a dutiful step-mother and knitter, I've finally given in to the cuteness that is baby clothes. On the weekend I was digging through my (large-ish) fabric stash for something specific (more on that later), when I kept coming across all these adorable baby-suitable prints. After a short while, I may have gotten a little bit side-tracked and started setting aside baby patterned fabrics and stopped the pretense of searching for what I had originally intended to look for. Hey, sometimes you just have to go with the flow.

Yesterday, I was minding my own business, finishing a 10th pair of socks for hubby, when I was overcome with this compulsion to flip through the Mason-Dixon Knitting that I had borrowed from the library. And there was the One-Piece Baby Kimono, just begging to be knit. Sized for a newborn. Resistance is futile sometimes. I realize that now. It didn't take long to dive through the yarn stash and find a suitably fluffy and cuddly yarn. In lovely sunny yellow. And less than five hours later I had my first baby sweater for Mat's baby. With the cutest little buttons that I couldn't help gushing over (yes, from my stash). Sorry, but no pictures today. Oh, yes. By now I imagine you would have figured out that I rarely leave the house without yarn and needles. Yesterday evening, on the way to a 4-H meeting was no exception. As we were standing around waiting for the woodsman demonstration to begin, I may have started another kimono. Actually, I did start one. In gorgeous green cotton. I'm at the shoulders already. Hee hee hee. So fun and so easy.
Posted by Barbara from Nova Scotia at 14:53 4 comments:

I found my next sweater pattern to knit! Miss Honeychurch from Knitty rocked my world. I love it! I don't have hemp in my stash and so I hope that this pattern will work as well done in cotton. I am very excited about this pattern.

For socks, Outside In is also lovely, and I am adding it to my queue, along with Cookie A's Summer Sox. It's a free pattern for Classic Elite.

Because I have commitment issues and rather look forward to starting something new, than finishing my umpteen UFOs.
Posted by Barbara from Nova Scotia at 15:18 3 comments:

AliP (link in the sidebar) provided me with a link to a new toy that is so much fun, I dare you to not waste time playing with it!

This is a cheater of a post, in other words something really short, just to say I haven't given up on this blog thing.

To summarize the past weeks: 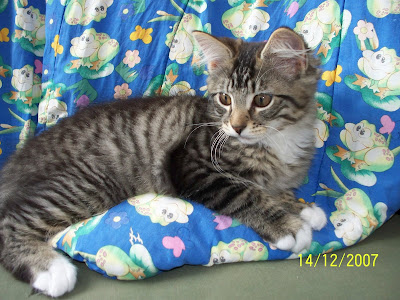 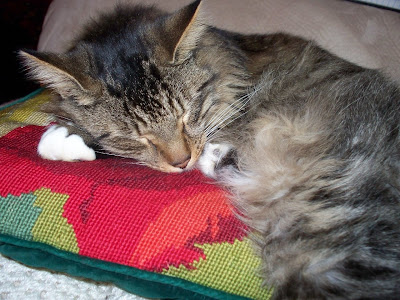 Posted by Barbara from Nova Scotia at 20:50 5 comments: