Last Saturday we packed up the kids and a neighbour's one to boot, and started driving. We had grand intentions: swimming in the ocean (I even wore my bathing suit) and maybe even finding a place to go clam digging. Turns out we didn't do any of that but still managed to have a good time of it. The three boys were in the back seat talking about cars non-stop. (By Yarmouth I was ready to leave them by the side of the road I must admit.) We enjoyed some beautiful scenery and not much gives me more joy than watching the many changing moods of the ocean. Naturally we stayed off the main highways. Our first stop was in Shelburne where we stopped into Frenchies and a used book store (Whirli Jigs, I think). Shelburne is beautiful, even more so than I remembered. I wanted to drive out to Government Point and see what has become of the Canadian Forces Station where I spent a better part of a year many moons ago, but the guys 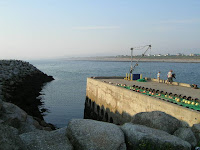 were intent by then to find somewhere to fish. And so we drove on. We haven't gone far when a cold dense fog moved in. Once we drove into Barrington we could barely see anything, let alone the ocean. It wasn't until Mataghan that the fog cleared miraculously and the day turned glorious once more. We stopped around Comeau's Point (don't quote me on that) and the guys tested their fishing skills. One of them foul-hooked the ugliest fish I
have ever seen, in the process of which they managed to break a rod. 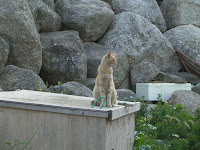 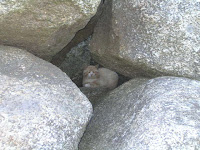 While they were fishing, the kids and I wandered around the wharf, surprised to see quite a few cats, completely wild. We also saw this. 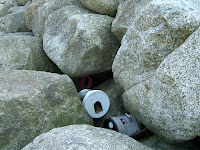 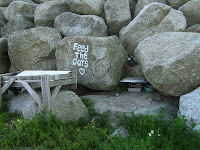 There were many make-shift homes placed between the rocks for the poor creatures. It also appeared that the fishermen were in fact feeding those cats. We found the odd plastic tub of dry cat food. My son was so moved by the sight that he wanted us to drive to the nearest store and buy cat food. Frankly, his concern was greater than anything I've ever seen displayed towards his younger sister!
The last stop of our tour was in Digby at the Captain's Table where we enjoyed a fabulous supper of fish and chips. Delicious. The two youngest, being great fans of Garfield, ordered lasagna and garlic bread, adult servings at that! LOL
It was almost 11pm by the time we made it home.
There really is no place like home.
Posted by Barbara from Nova Scotia at 10:43

So close, you were so close to me!!
Did you turn left at Tim's to go into Shelburne? I'm on the right hand side of the highway.
Sounds like you had a good day.
Hey, the boys like cars - there's an antique car show here tomorrow.
Whirligigs is the store :)

Ooh, that sounds awesome! We're planning a short road trip to Shelburne in a couple of weeks. And Shag Harbour to see the UFO crash museum.