It would appear that I have been on strike from the blogging. When I signed up for Blog 365, I thought it would encourage me to post more regularly (doh: everyday is as regular as it gets!), and practice more creative writing. That's not how it worked out. The pressure to post as the midnight hour approached was wearing me down. I posted more and more pictures instead of taking time to skillfully combine words into thought provoking sentences. So that's when I had a little chat with my self and self and I came to the conclusion that free will gives us the right to post crap everyday at the last moment, or not. I/we chose not to. Hence the strike. I am back now. I am not promising that I will post everyday, but I will make an effort to post a bit more quality for those of you wasting your time reading this blog. 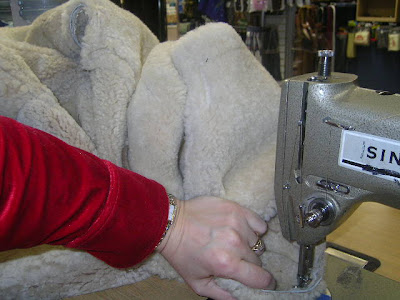 About three weeks ago, I had an interesting project present itself to me at work. A woman brought in a sheepskin jacket (men's) and wanted it altered to fit her. This jacket was the real thing. Take the guts and head off the sheep, and voila, that was the jacket. Turns out the real thing is much heavier than the fakes. (And much more beautiful.) I took the sleeves off and apart, and separated other parts of the main body needing alteration. It was so thick to sew, I actually sheared the edges that needed stitching so the presser foot would not catch on the fleece. The above photo shows me wrestling with the lifeless sheep as I attempt to sew the sleeves back on. It made me realize that I should definitely work out more, at least to build up some upper body strength. I was totally exhausted after only one sleeve! And see how close my fingers got to that needle? The jacket was so heavy and awkward I had to practically push with one hand and pull with the other to move the part I was stitching. At one point as I felt I was making a bit of progress, I suddenly felt the needle snag the finger nail of my middle finger and when I yanked my hand back, I saw that the needle had gone right through my nail and just barely nick the tip of the finger under it, enough to leave a mark but not to draw blood. I took a moment to thank my luck and finished sewing the second sleeve on. Later, I contemplated my good luck for not drawing blood, because how on earth would I manage to get that off the jacket! 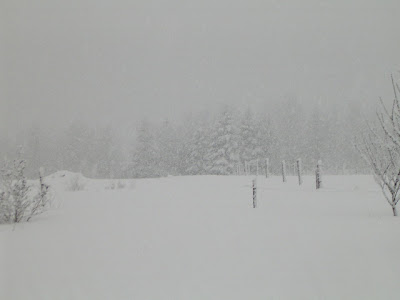 This is what Sunday looked like a week ago. We got over a foot of snow. It was wet packing snow, and heavy. The kids took advantage and the photo below showcases their handiwork. 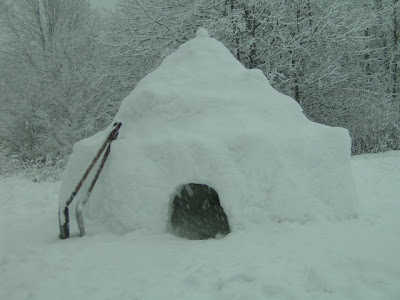 While they put the finishing touches on it Sunday evening, hubby had a genius idea for removing the snow of our very long drive way. So we got bundled up (it was still snowing heavily!) and we started rolling snowballs down the driveway. When the snowballs got so big we needed both of us to move them, we rolled them off the driveway and admired the cleared path. It was exhausting work but a lot more fun than shovelling. We had a blast. When we could roll no more and were too soaked from the snow and sweat, we finally went inside. The next day it turned extremely cold and windy and more snow had falled overnight, and I regretted not making just one more snowball to remove more of that snow. The remaining snow froze, not only making it difficult to shovel but made it impossible to drive up the driveway. (My next truck will definitely have four-wheel drive!) 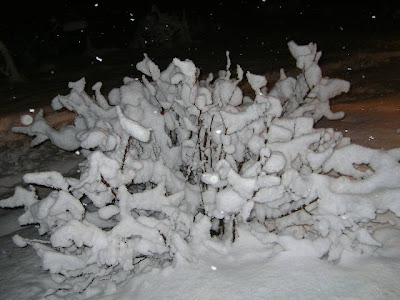 What a week that was! School was cancelled on Monday, Tuesday was beautifully sunny but cold and extremely windy, and school was cancelled again on Wednesday because of the morning snow storm, followed in the afternoon by torrential rain and a flooded basement. I stayed home from work. Thank goodness there wasn't any significant power outage in our area, unlike PEI.

Well. Enough for now. Time to get ready for work.
Posted by Barbara from Nova Scotia at 10:26

That was totally a post worth waiting for. Spectacular photos (hey were I live winter is like your late spring, early fall).

I don't remember where I originally got the link to your blog, but have been reading it for ages. (sorry that's really unsatisfying) but it would have been a link from one of the Canadian/Nth American blogs I read. I only comment really rarely on anyone's blog, but your pictures made me smile on a pretty dreary week here, so thank you

Pooky, I has missed you!! Maybe I can get time to call tomorrow.
Its been cold and now we are having some more (MORE) frakking flurries. At least it will cover up the dog poo on the old snow.yuck

In the picture above, what is making those shapes in the snow?