Everyday that I check my email, I think to myself that this will be the day that I will update this blog. Then I get lazy, say I'll do it later and later turns into tomorrow or sometimes a week. You know what I mean?


I tried to work up a proper head of steam and fury during the Easter weekend when it snowed, and then snowed some more, when it was generally so miserable outside that I avoided going out at all costs. But no. Couldn't do it. I took some photos though, because knowing my memory or lack thereof, I will complain about the snow in April next year and hubby will try to remind me ever so gently that we had snow around the same time the previous year, and I will feel compelled to argue with him. Naturally.

Here's Tommy, Easter Sunday, around 4:30am, looking at the snow with that "what the h*ll is up with this white crap?" look. 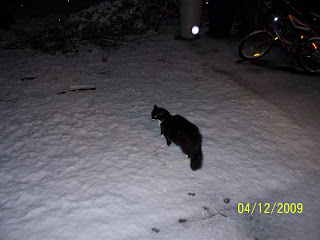 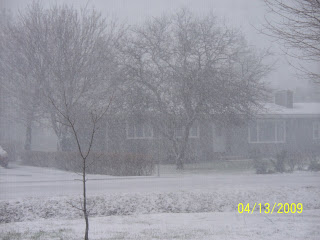 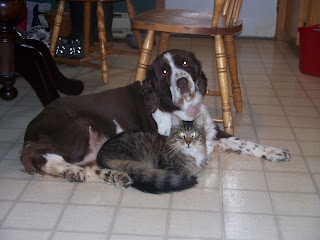 That's Kora and Sam. I swear I didn't put the cat there. He just follows Kora around and snuggles up to her at least a couple times a day. Like he knows she won't be around much longer. For now at least, the puddles she was occasionally leaving on the kitchen floor have stopped. I am not putting a diaper on my dog! The hearing loss I can deal with. The fact that she's been wandering out into the middle of the road for no apparent reason has made me watch her more closely. I've been giving her baths more often because she's been stinking more (is that a true sign of old age in a dog, though?). And in hushed tones hubby and I have be discussing who will be the one to take her for her final vet visit. Let me put it this way: he's not exactly volunteering. 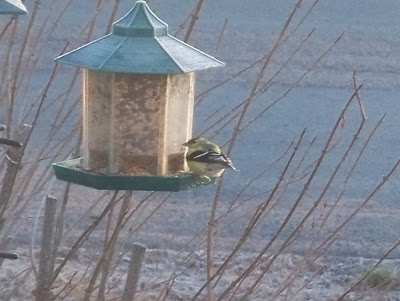 I've been taking photos of birds coming to my feeders too. Lots of birds that drive my poor cat Sam absolutely crazy. He lays there on the back of the sofa, stares, and starts to chatter in that way he has any time crows or blackbirds invade our yard. It's like he takes personal offence. 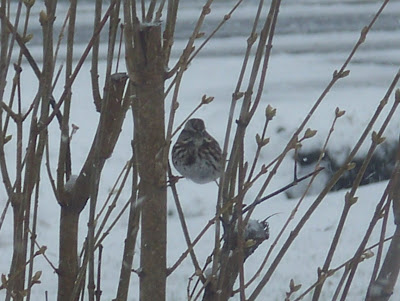 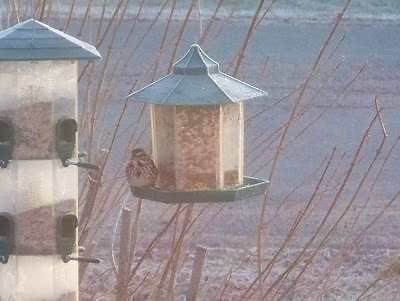 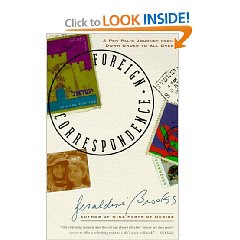 I finished my daughter's socks and apparently she likes them. A lot! She's worn them for two days now. 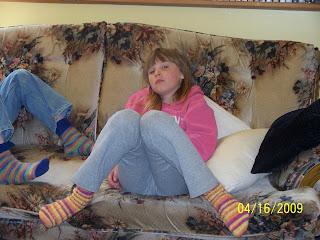 Posted by Barbara from Nova Scotia at 12:57

Oh wow, I can't believe you guys are still getting snow. I'm packing up some warmer weather and sunshine and sending your way..pronto!

Glad you kept that snow on your side of the province.

That's the thing I fear with my animals -- my two cats will be 13 next week, and the other one is 10. The dogs are just pups yet. I've had my cats all since they were six weeks old. I know the time comes for every living thing, but I'm such a softie.

When it became obvious that it was time for Louie (our kitty) to make her final trip to the vet, it was quite a sudden decision, and both my husband and I went ... no thought put into it, he knew I wouldn't be able to go alone. When it was time for Elvis (our old lady dog) to go, we both went -- it was our time to say goodbye to her, and neither of us would have wanted her to face it without us there - we wanted to be the comforting voices she heard. I hope you can convince your husband to go when the time comes (it could be a few years from now ... some dogs take a long time to age - even after they get smelly;) ), it is the hardest thing you will ever have to do, but it is also the last thing you will get to do with her, and a very loving, selfless thing to do.

And -- the bits of best advice I got before we took our pets was - before you take them to the vet, put away their toys (very hard to see when you first get home), and pay for the service before you take them into the room to have the proceedure done (once it is over, you will want to go home with your family, not rummage through your purse for money/cards, etc.).

Sorry to be a downer and take up a lot of space ... you got me thinking about our losses , and how much our girls meant to us, and I couldn't help myself but to offer advice.