Although I've been getting small things done around the house, like projects that have been sitting around collecting dust for months and years, such industry has cut into my blogging. Maybe not. Time to call a spade a spade. I am a slacker and a procrastinator. An accomplished one at that.

A week and a half into the Lion Brand knit-along? I've got the ribbing done, the set up rows and a couple rows of body. That's it. My excuse has been the lack of charts that were hinted at being available last Thursday but that didn't happen. The only reason I started knitting from the written instructions is so I wouldn't look like I've been sitting on my hands while everyone else has already posted about having completed at least one set of repeats. They're making me look bad. Also providing incentive, which is precisely why I join these knit-alongs. No pictures until I finish at least one set of repeats.

To combat my slack ass blogging? I joined the NABLOPOMO for February. Giving you a heads up so you don't fall off your chairs when you see a daily post at least one month this year. HEH

I finally finished Brianna's quilt. She loves it and threatens anyone who dares touch it. It was my first quilt and I'm just happy it's done. There is lots I am not happy with but I'll just chalk it up to a learning experience. 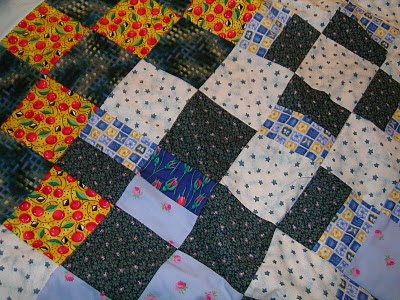 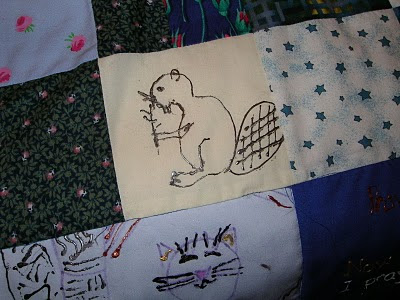 The border blocks were done by Brianna's friends on her nineth birthday, and one by Colin and another couple by me. Daddy designed couple smaller ones, including the beaver.

On the reading front, I just finished another of Jen Lancaster's books: Bitter is the New Black. Funny, funny woman. She even blogs at http://www.jennsylvania.com/. If you don't mind snarky and need a good laugh, she delivers and then some!

Posted by Barbara from Nova Scotia at 15:31

Cute quilt! I've been wanting to piece one for quite some time but I'm a procrastinator too.

Jen Lancaster is so funny. Love her books.

You are inspiring me to consider using my machine....