Then There Were Two

First, just a teaser for Dorothy: PIF is ready for assembly...

And because Dorothy is in need of reading material, today I will tell a sordid family tale.
Naturally, it starts with a boy and a girl. Girl was a sucker for a guy in uniform. Hubba hubba. Girl falls in love with boy. Turns out that boy comes with a package from previous marriage. I can do this, she thinks to herself. Wow, raising kids is hard. Talk about jumping out of the pot directly into the fire! Having done the diamond ring thing, they combine households. The absentee mother of boy's offspring appears out of the woodwork to stir up trouble. They all persevere. There is a marriage. Then there appear two bundles of joy in relatively short order.
They are one big happy family (more or less). Occasionally, just when things are going well, the "other" keeps stirring pot and emotions there in, you know, just to keep things interesting. The offspring are all growing up healthy and with good manners. They all endure a couple moves, between provinces, treating each as an adventure. Good times and some bad times. Lots of pictures for the photo albums. Lo and behold: the first batch of kids are already teenagers! Where have the years gone? Second batch of kids are starting school. Oh the happy boy and girl are starting to feel their age.
Then, one dark and stormy night (actually I don't remember if it was in fact stormy), girl and first daughter get into huge argument. First daughter leaves home. Decides to live with original mother. Nah, that doesn't work out, so first daughter moves in with her best friend. Wow, this daughter is sure getting around this country: three provinces in less than a year. She appears to be happy with her decision to be estranged from her family. She is living her life. She meets boy. She gets pregnant. She gives birth to bouncing baby boy. She still resents contact with family. Father of baby turns out to be a lazy slob so she moves out on her own with baby in tow. Gee, she finally realizes it's rather difficult to work and take care of baby and get education all at the same time. She agrees to let lazy slob's parents care for the baby while she works and goes to school. Oops. Not such a good idea. She contacts her family for advice. Holy cow; almost five years have passed and there are lots of hurt feelings to overcome. Enter stage left first son and his girlfriend. They convince first daughter to come back with them to family home. Emotions run high. The air is electric with venting of past hurts. A truce is called. All is good. First batch and second batch of kids is reunited and happiness abounds. There are many promises to never let it happen again.
All is good.
Time will tell. So, first daughter is on the South Shore, and will be studying culinary arts come September. And first son, he just moved out to live with the girlfriend in NB, and look for work while he waits to get into the military. And now there are two. It's much quieter in the house these days (unless second son and daughter get into one of their discussions). Parenthood: isn't it great.
Let me introduce you to my step-grandson. This is Dawson: 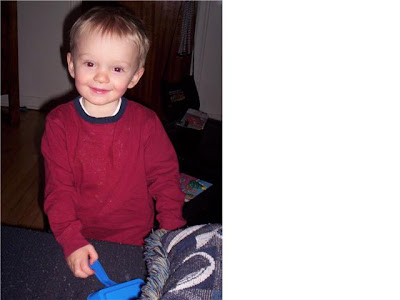 Stay tuned for the continuing saga of our clan.
Posted by Barbara from Nova Scotia at 09:09

OH my goodness, what a story.

And holy cow what a cutie patootie!!! That smile, those dimples ... ohhhhh Pinch his cheeks for me ... but just lightly :)

He's a handsome lad! I hope things work out well for everyone. My husband's family is really -- well, estranged to put it mildly. Mine is quirky, but nothing like his. Makes it hard.

Man that story sounds really familiar!! Is it about someone we know Dear?? What ever happened to the handsome dude in uniform??