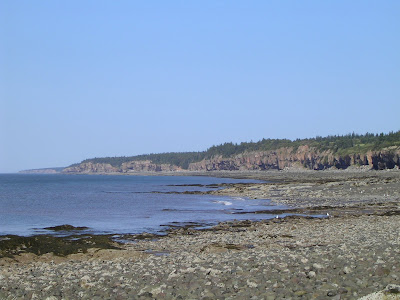 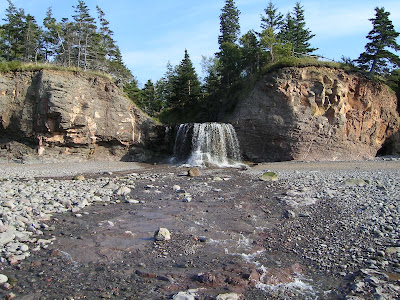 No point being at the beach without building dams and getting wet. 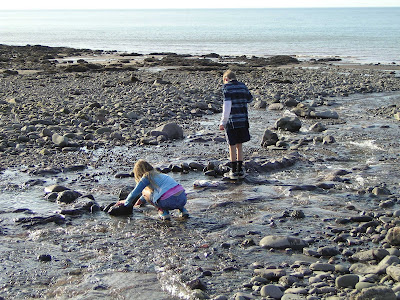 On Saturday I drove to Upper Clements Park so the kids could take advantage of their fast passes (no pictures because I forgot the camera at home); unfortunately the roller coaster was out of commission (broken) and it being the last weekend of the park being open the lines for the rides were rather lengthy. The kids still had fun and were properly tuckered out by the time we got home.

On Sunday we watched the Arctic Tale (National Geographic Production) which I highly recommend. Funny as all get out and enlightening.

On Monday I put another coat of stain/varnish on the bathroom cabinet. It's starting to look quite good, but still needs at least one more coat. Then we drove into the city to pick up hubby who did not bring any fish home. I also finished knitting the Drops sweater (from March Sweater Madness). I didn't have enough yarn for a hood so I just knit on a small collar. Ironically enough, the fit is tight. Imagine that! Remember the ginormous monstrosity that it had begun as? Granted, I may have gained some weight but still... Good grief. I'll have to see if blocking will help any. 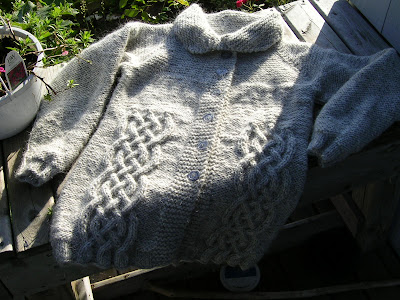 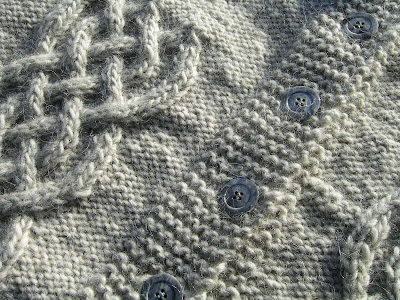 Yesterday I sewed on the buttons. I like it. It is quite nice. It even fits, with negative ease. It'll definitely be warm.

This morning was very emotional and very sad. Colin ran into the hallway after practically jumping out of bed (this in itself being highly unusual), saying that Sam was under his bed and making funny noises. I immediately went on high alert because things had seemed well the past few days. Although Sam had been ill in much the same way as Pointdexter, I got the same medicine for him, and he was starting to eat heartily-- mostly pure meat to get his energy back--as well as drinking plenty of water. He was starting to recover. He even jumped up on our laps for snuggles. Last night he decided to sleep next to Colin, and was purring when I went in to say good night. When I looked under Colin's bed my heart just about broke and I started to cry. Sam was laying under there stretched out, without any energy to lift his head. I pulled him out and wrapped him in a blanket and listened as he struggled to breathe. He was completely limp, and had a sad look in his eyes. As I sat with him on my lap stroking his head and crying freely, having sent the kids to their rooms, I kept murmuring how much I loved him and how much I would miss him. In less then 10 minutes he was gone. I called the kids down to say good bye and then I took him outside wrapped in my blanket. After they left for school, I went and made a spot for him at the back of the property beside his favourite rose bush. When I looked up I was surprised to see how the morning sun was burning the dampness off my sheets that I had hung the evening before. For some unknown reason this struck me as very beautiful and was enough to snap me out of my tears and sadness. Life goes on. 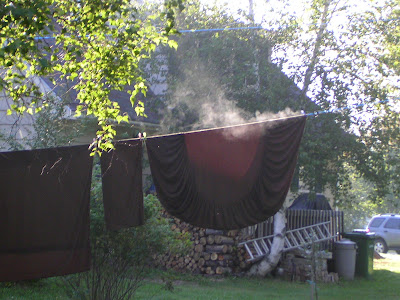 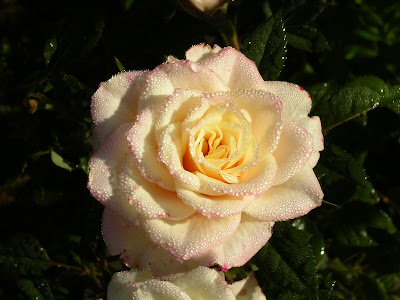 Posted by Barbara from Nova Scotia at 11:56

Oh, I'm so sorry to hear about Sam. That brought me to tears. Losing an animal is SO SO hard. Hugs!

P.S. That beach looks gorgeous and so peaceful. The sweater is really lovely too.

Sorry to hear about Sam! What a shame, poor thing.

The roller coaster was out of commission when we were there the weekend before.

I am so sorry tohear about your kitty ... it is so hard to lose a pet (they are so much a part of the family).

So sorry about Sam. Losing a pet is both losing family and friend.

Aww, I'm so sorry for you. This is such a tough thing to go through, my thoughts are with you.

Oh dear. You did good by Sam. Thinking of you and your family.