Friday Felines with a Knitting Kick 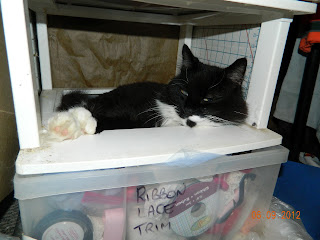 Thomas is such an opportunist!  I took out the drawer with all the zippers and when I went to put it back, Mr. had already made himself a nice nap corner.  Because what are ribbons if not more decorative with a little cat hair? 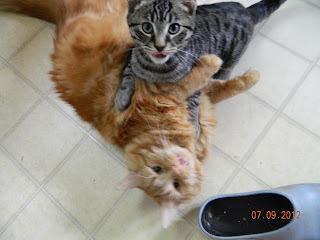 Zeus and Knit-Wit battling it out, again.  Didn't appreciate the interruption by the looks of things. 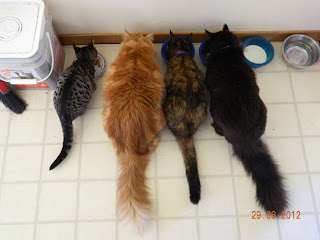 Dinner time at the zoo.

Now for an update of my Halloween Dash.  I haven't figured out my actual goal yet, but I suspect I might start by trying for 4000g since I want to use partial balls of yarn and that would make too fiddly to figure out the actual yardage used.  Weight is easier since I have a scale.

So far, I have knit two pairs of Briggs and Little socks for my husband, each weighing in at 176g and 177g respectively.  Not a bad start.  I'm working on another pair of socks, these ones considerably lighter, which might not be in my favour as far as this tally goes.  It's a skinny pair, and we know a ball of yarn for those only weighs in at 50g, but the yardage is considerable.  It all adds up, the way I look at it.

Posted by Barbara from Nova Scotia at 19:59

Okay, I sometimes find it challenging to get stuff done with *two* helpers! You've got a challenge on your hands.

And the little sweater is adorable. It looks like you left an overlap section in the collar to loosen it up- that's a good idea.