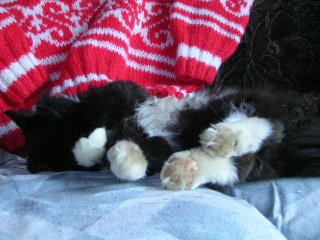 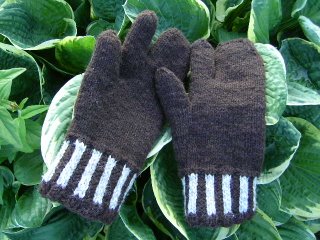 Trigger mitts, designed on the needles, knit from wool of a sheep that now resides on my farm. They fit me perfectly. I hope they fit the recipient as well!

Thomas (apparently I was disturbing his sleep during the photo op!) with a finally finished mohair-blend sweater that's over 18 years old. Kid you not. I bought the yarn when I was still in school (high school that is!), living at home. Granted, it was my last year at home but still. It was my first ever colour-work and first sweater and first mohair yarn, blah, blah, blah... And I don't even like it, and it's huge and makes me look even huger. It sat in a box waiting to be sewn together over 17 years. I didn't have a clue about finishing knit stuff back then, because let me tell you, it took many hours and MAJOR perseverance to undo those seams that I did stitch. And I was too ashamed to take pictures of the horror. Now the shoulders are grafted (can you believe it??!) and all other seams are done by the book and I can even get the darned thing over my head. Yes, I had MAJOR issues with the neck band being too tight. Don't ask any other questions. I should have taken the thing apart and reused the yarn for socks or something. 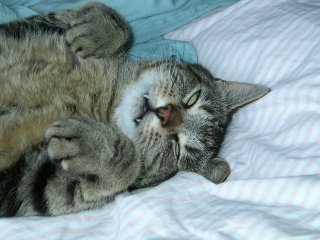 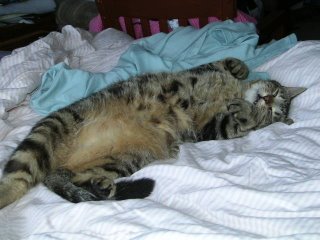 I leave you with pictures of Oscar, the Vampire Cat (who loves his picture taken!).

NB No photoshopping involved!
Posted by Barbara from Nova Scotia at 22:25

Love Oscar (and so glad that we're not the only ones with critters, cats and dogs) who seem to prefer sleeping on their backs.

Awwww... look at the cute fuzzy feet! (er... just noticed the sweater - no comment on its quality, its lovely, I've just never seen a cat with feet as fuzzy as Mojo's) and the vampire cat is adorable (albeit in a slightly alarming way). The mitts rock!