Rain, Rain, Go Away, Don't Come back 'Til I Say

That's my daughter's version of that song. I think I like it. 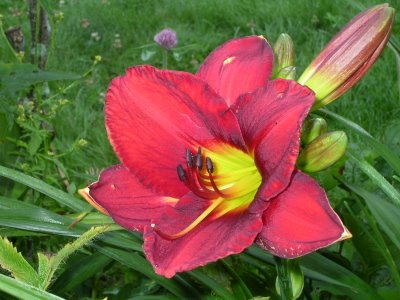 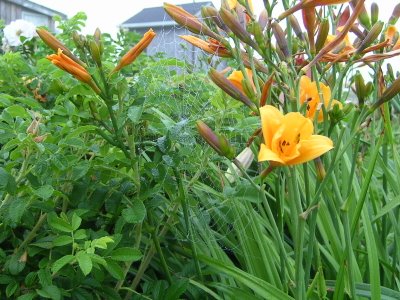 Spider webs. I don't know why there are so many considering all this & @%#$*! rain we've been getting. You'd think they'd all keep getting washed away. This year is proof you can't trust the Farmers' Almanac. Dry summer, my arse. The two holly bushes I bought and planted in the spring have actually drowned. I am SO not impressed. Seeing how I actually planted what I purchased in the same season, never mind year. Because I do have a couple currant bushes I bought last year (or was that two years ago?) and they're still in their original pots. Alive, though, and that's better than the hollies. Maybe if I didn't try to change and procrastinated with their planting, they'd still be alive. Hmm.

I am still knitting, but not so much today. Yesterday, I finished a pair of sock for hubby of yarn I acquired on ebay. And I still have a bunch left over enough for at least another pair. Picture of those when I got my batteries recharged. Slow knitting day today, just working a bit on that fuchia cardigan. My left-hand index finger is in a lot of pain. I am starting to suspect arthritis (sp?) because it hurts after a difficult sewing day too. Hubby thinks this bout was brought on by yesterday's marathon knitting. Besides his socks, I knit a scarf/shawl type thing of Fleece Artist curly locks mohair on, get this: size 15mm needles. They were a royal pain in the arse! Anyone want a pair of 15mm needles??? Never again. See, I knit the whole thing up as a triangle on 10mm needles first, didn't like it, tinked the whole thing, and started from scratch on the 15's in a rectangle. I think I cast on 22 stitches or so and knit until I ran out of yarn. It's a decent size, and I'm not redoing it again. Normally I wouldn't even have bought such impractical yarn, but my brain got befuddled by the beeeautiful colours. Very rich. Wait til I get that camera working again!
Posted by Barbara from Nova Scotia at 16:02

My mother has just started recently to teach me knitting. Her sister - my aunt - went to a yard sale and bought a big box of different sized knitting needles. My mother had most of them so she gave them to me! I don't even know what to do with them all or why there are so many different sizes! But, I haven't even perfected the art of "casting on" yet. I have so much to learn.

Barbara,
too bad we can't trade some of our hot weather for some of your rainy days. We'd both be happy.
Size 15mms - ouch, I can't use larger than 10mms without getting hand cramps. Still, the scarf/shawl sounds lovely.