Because There Are Always (at least) Two Points of View 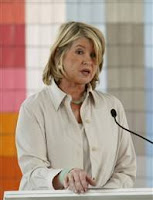 
Martha: Stuff a miniature marshmallow in the bottom of a sugar cone to prevent ice cream drips.
Maxine: Just suck the ice cream out of the bottom of the cone, for Pete's sake! You are probably lying on the couch with your feet up eating it, anyway!
Martha: To keep potatoes from budding, place an apple in the bag with the potatoes.
Maxine: Buy Hungry Jack mashed potato mix, keep it in the pantry for up to a year.
Martha: When a cake recipe calls for flouring the baking pan, use a bit of the dry cake mix instead and there won't be any white mess on the outside of the cake.
Maxine: Go to the bakery! They'll even decorate it for you.
Martha: If you accidentally oversalt a dish while it's still cooking, drop in a peeled potato and it will absorb the excess salt for an instant "fix-me-up." (Do you really think Martha would admit to a screw-up like over-salting?? I think not! She's innocent, remember?!)
Maxine: If you oversalt a dish while you are cooking, that's too bad. Please recite with me the real woman's motto: "I made it and you will eat it and I don't care how bad it tastes!"
Martha: Wrap celery in aluminum foil when putting in the refrigerator and it will keep for weeks.
Maxine: Celery? Never heard of it!
Martha: Brush some beaten egg white over pie crust before baking to yield a beautiful glossy finish.
Maxine: The Mrs. Smith frozen pie directions do not include brushing egg whites over the crust so I don't.
Martha: Cure for headaches: take a lime, cut it in half and rub it on your forehead. The throbbing will go away.
Maxine: Take a lime, mix it with tequila, chill and drink!
Martha: If you have a problem opening jars, try using latex dishwashing gloves. They give a non-slip grip that makes opening jars easy.
Maxine: Go ask that very cute neighbor if he can open it for you.
Martha: Don't throw out all that leftover wine. Freeze into ice cubes for future use in casseroles and sauces.
Maxine: Leftover wine??????????? HELLO !!!!!!!(Not at my house, either!)

Posted by Barbara from Nova Scotia at 08:49

This is one of the most hilarious posts I've read in the long time. I defintely think that the Maxine method far surpasses the Martha method!