How Does My Garden Grow? 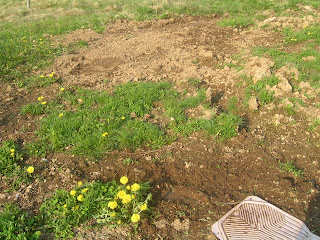 Not so well. This is about a quarter of my garden. I've been weeding by hand, preparing for sowing in a more natural, albeit labour intensive manner. See, the plan was to get as much of the deep rooted weeds out by hand so they're less likely to come back, and not pollute the air with our ancient tiller. That's where the good plan stopped. For one, the teeth-with-wings arrived (more commonly known as black flies), and the second, and bigger problem came to light when man/child and hubby were messing with the tiller to get it going. Apparently, it gave up the ghost in quiet solitude, leaving behind it's rusted carcass for me to dispose of.

My favourite tool? This sucker works great. If I'm careful, even dandelion roots don't stand a chance. See that container on the left of my favourite tool? Full of weeds that have suffered my wrath! On the right is an old car mat that I use to sit on to save my back. And I don't get as filthy either. 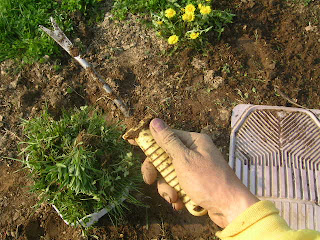 Now, it is true that I gave up the weeding for the time being, to get caught up on laundry. AND...
I ACTUALLY spent all weekend with my least favourite past time: housework. The house was in a desperate need of an overhaul. See, I would clean out a spice cupboard here, load the dishwasher there, fold the occasional pile of laundry while the rest lingered... It all adds up. Oops! I swept, and wiped, and scrubbed, and folded... Oh my! And the garden is still waiting. Maybe I'll get back to it... Tomorrow.
To answer Dorothy's question, the meat kings are all doing fantastic. I kept them in the house in an aquarium for a week, after which they got evicted to the barn to an unused rabbit cage, draped with a towel since that same night there was a major frost. They survived it though. Wings are almost completely feathered out, there are feathers on their backs, breast and a bit on the necks. So far, so good.
Today, I picked up the turkey chicks. Geez. I remembered how stupid the adult birds are but I forgot about the chick stage. They kept ignoring the feed plates, and instead just pecked at the walls of the aquarium. Eventually they figured out where the water was but I had to show each and every one where to get feed. Duh!
Knitting? Yes, a bit. I have to graft the toe closed on the first sock for my daughter (in miserable slippery cotton, bleh!). I've been knitting face cloths to use up some of the cotton stash.
I have been so good with this whole yarn diet thing. Not one single skein of yarn purchased since January 1st!! I am so proud of myself. This weekend my daughter informed me that I should be on a fabric diet too. This from a 7 year old. I suspect she may have been talking to daddy! But in all fairness, I may have a box or a dozen full that hasn't seen the light of day for "a while".

Posted by Barbara from Nova Scotia at 14:43

Thanks for the meat king update. Haven't gotten ours yet.

I'm knitting cloths to use up my cotton stash as well, up to 30 at the moment - and I've given quite a few away.

Weeds, they suck all the fun out of gardening, don't they?