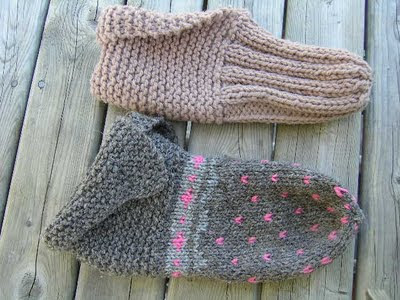 My love affair with the Drops slipper pattern mentioned in the previous post has fizzled and died. Dead. That would be the bottom slipper in the picture. Not nearly as cute and charming as in their photo. All this slipper resembles in real life is a glorified tube sock. Bleh! I'm trying to decide whether to knit the second one. If I were to felt them once they're a set, they might fit one of the kids or I could keep them for guests and they won't seem like such a waste of time having knit them.

The top slipper was my revenge for the crappy Drops pattern. I knit this one in Briggs & Little Atlantic on 5.5mm straight needles. I just fudged a pattern as I went along. This is size extra large. I cast on 36 sts, knit for 17 ridges, switched to 2 X 2 rib, starting with K1, P2 and ending with K1 until desired length, in this case 24 rows. Then I began the decrease rows by k2tog on every k2, and repeated it for the second row. In row three I knit together every k1p1 to the end, cut the yarn and threaded it through a darning needle, to cinch together all leftover stitches and continued to sew up the top of the slipper. Then I sewed up the back heel, flipped the edge over like a cowl and tacked it down at center back. Done. I am much more pleased with this slipper. I plan on knitting the second one tonight and felting them a bit. Stay tuned.
Posted by Barbara from Nova Scotia at 14:56

Ok, now sit yer arse down and whip me up a multi gauge formula for those puppies, STAT!