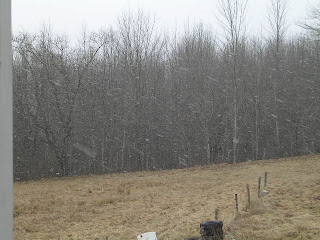 It's April 3rd, right? I didn't sleep through some important notice that we're back in Winter mode again? Are you SURE??


It is catch up time again. Imagine that. See, March was all about the March Sweater Madness. 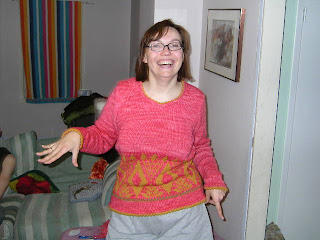 Go see the other progress pictures and read about the Madness. 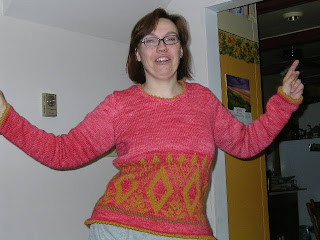 For me, it was down to the (almost) last hour! And you wanna know something really good? The wool for this sweater came from my stash.

Yes, boys and girls, the yarn diet continues, in spite of all the temptations. Another five (5!) months to go! Oh My!!

Gotta tell you all something. I was laughing (possibly crying) for a while after this was revealed to me. I live in a house with 3 guys and a girlie girl. The girlie girl knits or should I say, is learning to knit, and I knit (obviously!). All the guys wear wool socks made by me, but especially when they're going out to work in the woods in winter, or hunt, or fish, or play hockey.... You get the picture. The guys and I were waiting for the hockey game to come back on (Toronto vs. Pittsburg and Ottawa vs. NYI, not that this matters). The girlie girl was already tucked into bed. We were just chatting away; there is a LOT of competition in this house over hockey, since each person supports a different team. Anyway, getting to the point... Out of the blue we started talking knitting and yarn. Actually not out of the blue; I was finishing all the seaming on my MSM sweater and hubby was "encouraging" me to just stop talking and get it done. The out of the blue part was when I commented how much I liked this yarn and how I haven't bought yarn in three months already... and they should know a present of yarn DOESN'T count as breaking the yarn diet because I am not the one buying the yarn. The teenager said he thought about buying me some Yellow yarn for Christmas (because yellow is my favourite colour) at which time I got a chance to educate him that yarn isn't just yarn, and to stay away from acrylics if he wants to please me... ANYWAY!! Hubby pipes up and says "You know, I never really thought about buying you yarn..." Can you imagine? Gifting yarn to a knitter is NOT an obvious choice! OH MY!

I need to print MANY copies of Harlot's and Franklin's suggestion lists what to buy for a knitter! I didn't think it would come to this. It's not like I don't throw hints their way. A would love to have a swift.... It would make my life sooo much easier...

My two youngest at Crescent Beach a week and a half ago. A family outing which we all enjoyed tremendously. The temperature was +16 C. Incredible. 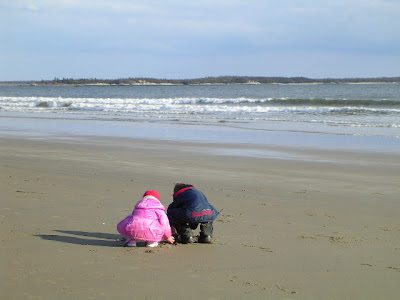 Posted by Barbara from Nova Scotia at 14:19