First a confession. Although 600 stitches sounds like a great deal of those itty bitty stitches, it only equals to two rounds. Seriously. Thanks for the life line tips, but I am definitely not putting them in every row. Each round has 303 stitches if I don't count the four stitches that mark my steeking line. Missing one yarn over was purely accidental and I chalk that up to trying to knit too late at night, trying to knit "just one more row". Dumb. I don't plan on doing that again unless we're at the final couple days. As for the colour work goof up? That was my mistake of not reading the chart carefully enough. I assumed that the colour change happened every five stitches which is what I knit, instead of alternating between five and seven stitches. At least I caught early enough before it caused me a major headache, as the stitches didn't line up on the second colour work row. 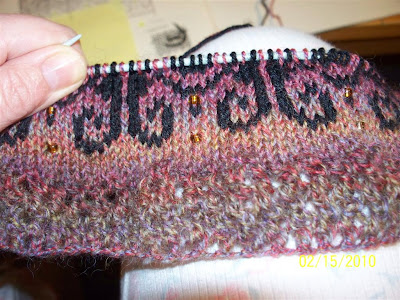 Anyway, although I didn't make major progress today (totally slacked off), I love watching the pattern develop. I love colour work. Honest! Much more so than cables.
As for the Olympics, I was overjoyed watch the medal ceremonies tonight and Alex being awarded his gold medal. GO CANADA! On the other hand, I swear Begg-Smith has ice water coursing through his veins. (So glad he didn't win gold, the traitor!) And must I point out what a huge disappointment the pairs figure skating has been. Bleh! Falling at the Olympics level? Seriously??
Posted by Barbara from Nova Scotia at 00:12

That Canadian-turned-Australian has a serious attitude problem. What a crab at the medals ceremony! Then I heard one of the commentators say that his coach was contesting his medal, he should have gotten gold. Cry baby!

I watched some of the figure skating. I think every pair I watched fell down. I turned the tv off when they still had four or so left to do, it was too late!

Your sweater is going to be so beautiful, B!!