EXTREME KNITTING and ADVENTURES OF HOBBES 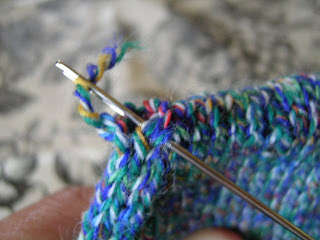 All I can hope for it that these stay together. I was determined to use up the single ball of sock yarn that has lingered in the stash for over a year. I wanted socks for my 9 year old, hoping I'd have enough for a short-ish pair, and started knitting from both ends. I'd work the leg, then the other, giving the ball a squeeze to get a rough guesstimate of yarn remaining. Turn the heel on one, then turn the second and give the yarn another squeeze. All a very precise and scientifically exact way of judging remaining yarn. Don't look at me like that. I was maybe half way down the length of the feet when I started scrounging for yarn that might do OK for the toes (you know, just in case; I was SURE I wouldn't need it!). Yeah. Wednesday night at work was boring. No sewing. So I knit. Only to the toe decreases. Made son try sock on when I got home at 10pm. Intensely relieved that I was in better shape yarn-wise than anticipated. The following morning I decreased the toes, until there was only about 45 cms of yarn separating the two socks, cut the yarn in half and started grafting. The above is how close I came to screwing the whole thing up. If I were a cat, I'm certain it would have cost me at least two lives in worry and stress! 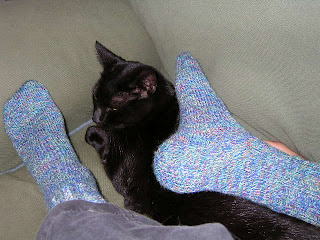 Colin pronounced the socks soft and comfy and promptly started to "break them in". The End

Skip ahead to Friday...

While this is what I was doing at work, 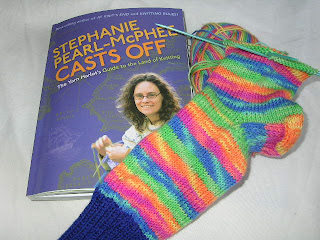 there was some strange stuff going on in the house. Apparently father doesn't keep as tight a rein on the household as I do. 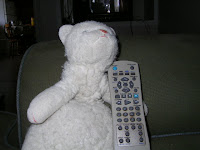 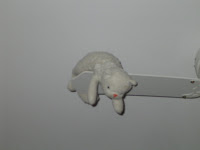 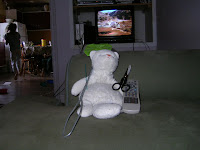 That there is Colin's buddy, Hobbes, in control of the remote, which is not at all shocking to me as he is a guy and all. Apparently he likes M*A*S*H as much as the rest of the family and I can understand the need for a fly swatter this time of year, but the scissors? I don't want to know... And it looks like things got a little crazy there... 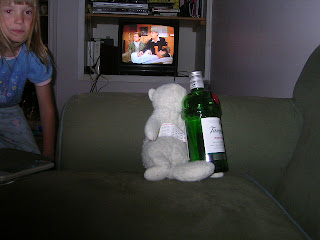 I have to say this is where I draw the line! The fur ball will be locked out of the house the next time I go to work. Bad enough he was in my booze (the empty bottle was sitting by the basement door!), but if you look closely, he's wearing a ball band from one of my yarns! And that's just WRONG!! Apparently he had an accomplice... Unfortunately she's a bit young to be sentenced to life of hard labour.... for now.
Posted by Barbara from Nova Scotia at 10:39

Considering how early you were into the martinis today, I'd say you had better lock up the hooch if the liquor lovin' gene has skipped to the stuffies. There would be no more 'tinis at noon!
Sock = whooooooaaaaa

I think that my knitted friend, Henry, has mentioned Hobbes as an old drinking buddy.

Hobbes had to have been hitting the bottle really hard to end up on the fan blade. That takes talent.