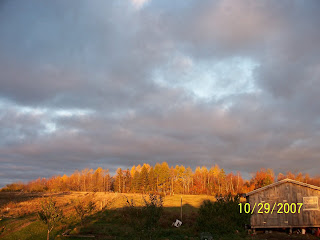 This morning, just after the sun came up. Striking, isn't it? I think I still love it here.

No, I haven't gone and moved without blogging all about it. We've had plenty of showings, and even an offer or two, but nothing serious enough to warrant a second thought. We have been thinking about where we eventually want to end up, and it turns out, after much discussion and soul searching, that it will not be New Brunswick. Let me explain...
When we first decided to sell the house and move, it was largely based on wanting our kids to be closer to other kids their own age, closer to activity centers, etc. Halifax was out of the question; prices of housing, the increasing crime, traffic, crime, ridiculous housing prices, crime.... You get the picture. We didn't want to have anything to do with Halifax. (Which is why we had moved to the country in the first place, but I digress.) I/we realised, to have decent services, that we would definitely have to move closer to a town, possibly within town limits (gasp!). But we didn't want to end up working just to pay a mortgage and taxes on a place in town. I am sure I don't need to point out that accommodations in town are way more expensive than in the country, but there, I said it anyway. (I'm like that: stating the obvious.) Anyway.... I think more than anything else, we simply chickened out of the whole Miramichi, NB idea. Don't get me wrong: there were lots of schools, elementary and secondary, lots of libraries, quaint town centers, plenty of services. The Miramichi River running through it all made it pretty as a picture. There even reasonably priced homes. Within our means. But the shock to the systems of moving off a 150 acres to a lot 150' by 150'? Of being reminded just how small the average town lot is? Too much. I don't know. Having to whisper in your own house so your neighbours don't know your business? Actually, the neighbours here seems to know my business... Even as I write this, it sounds like I am just making excuses. I do recognize the need to move from this particular area. I guess what it comes down to is that I really and truly like Nova Scotia. So. What I'm trying to say is that we've started looking at Annapolis Valley as a possibility. 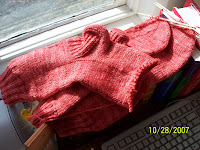 In other news, this pair of socks is now completely finished. Did you happened to notice that there are three?? Yup. Talk about a colossal screw-up! I knit the first two, not realizing that I had cast on a different amount of stitches. The first sock was all kitchenered up and everything. That's the one that had 8 (!!) extra stitches. How in hell did that happen? Good grief. Anyway, I didn't realize the size difference until the second sock was done. Don't ask how I could have missed it. So. I started knitting the third sock. See, I didn't want to deal with all the unpicking of my ever-so-clever sewn in ends. Had to anyway as you can plainly see, because the rest of yarn had been dyed quite a bit darker (not by me). I know some people (Alison) that are quite happy to see the grandeur of my freakish knitting accident. 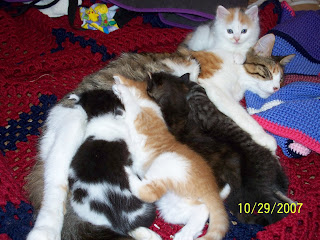 And last but not least, feeding time at the zoo.
The kittens will be ready to go in another three weeks or so. Any takers?? They're really cute, and playful, and have been handled a LOT so they'll make great pets...
Posted by Barbara from Nova Scotia at 09:30

I'm from Miramichi and I wouldn't move back there, as much as I love it. It seems everytime I visit, something else has closed down.