So, like I said before, the dates on the pics are messed up and should read Jan 2/2008.
We should have known right from the start that nothing good could happen on that day, as it was the 10th anniversary of my father-in-law's passing.
But we had to go to Digby to pick up the man/child from the ferry so it's not like there was a choice about getting out on those crappy roads. The weather was hideous. A full-blown winter storm, thank you very much. What made it even worse was having to follow a snowplow/sander for a good portion of the trip which decreased visibility to practically zero. The ferry had it's own problems too. It was close to an hour and a half late leaving Saint John, New Brunswick. Something about a lobster trap getting tangled in a propeller or something. 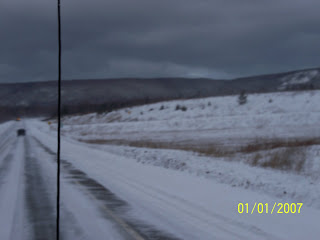 Are those roads a sight? That's the 101 Hwy! The North Mountain in the distance. You know what the highlight of the whole trip was? Before we left Digby to get on the highway, we stopped by Superstore and I went on a little shopping excursion. Oh yes I did! For raisin bread and turkey roll slices and a jar of dill pickles and some baby carrots and some fancy shmancy apple juice (organic no less!), and a huge tray of assorted nuts for dessert. That was our picnic lunch in the truck. (Don't be silly! Of course I forgot to pack something from home. But we deserved a treat.)
Naturally, with all the delays, we were late meeting our (new) real estate agent for our first appointment in Lawrencetown. And the lateness just snowballed (excuse the pun!) onto our other appointments. I was in such a daze I don't remember how many houses we looked at. I do remember that a few weren't even shovelled out. To get to the front door of one, we walked almost knee deep in snow. Brrrrr. On a positive note, our new agent is fabulous. A vast improvement over the jerk we had before the holidays. 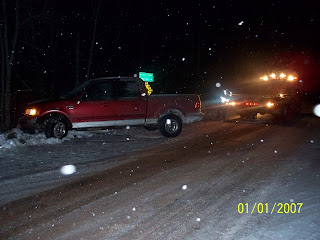 So. It was getting dark by the time we got on the road for home. The roads didn't improve as the day wore on. If the main highways were as bad as in the above photo, imagine what the smaller roads were like. And that brings us to our "mishap". Hubby was driving the whole day, poor guy. (Personally, I think it's the whole man=control thing. But what do I know?) We were in the home stretch, only about 20 minutes from home, if the weather was decent. And there we went, sliding through a stop sign at a T-junction with the #10 Hwy. Crossing under the highway is a river, and the only thing that stopped us from going in was hubby madly steering for the guard rail, and hoping for the best. We were lucky in so many ways: that there was no oncoming traffic, that we belong to an auto club (we only had to wait about an hour to get towed out!), that we didn't go into that river, that the truck wasn't severely damaged and we managed to not need to deal with our insurance company, and of course the most important, no one was hurt. In shock, definitely. But safe. Oh yes, we had many people stop and offer assistance. One couple with a van even offered to drive our kids home, which we took them up on. Only three vehicles never stopped to see if we were ok, much less slow down.

Posted by Barbara from Nova Scotia at 08:27

Glad you stayed out of the water!

Me to that would have been fugg'n cold!!!

Would be nice if we could figure out a way to get the yarn here. I've got no plans to go that way anytime soon. Hope you can find a good home for it!